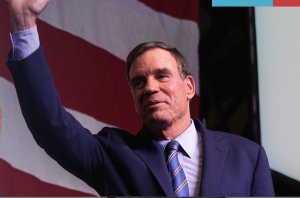 Photo of Mark Warner from his 2020 Campaign website.
With the vast majority of votes counted in Virginia, Democrat Mark Warner appears to have won reelection to the U.S. Senate with 55.63% of the vote. Warner's win mirrors that of Joe Biden in Virginia who won nearly 54% of the votes tallied. In Prince William County, which turned more blue this year than in 2016, Senator Warner won 64.45% of the vote. With 44% of the vote, Republican opponent Daniel Glade did well against the popular senator who previously served as governor of the commonwealth. This will be Warner's third term in the U.S. Senate. Warner was elected to the U.S. Senate in 2008, and re-elected in 2014. Prior to his Senate career, Warner was the 69th Governor of Virginia holding the office from 2002 to 2006. His Senate Biography page notes that when he left office in 2006, "Virginia was ranked as the best state for business, the best managed state, and the best state in which to receive a public education," Warner is currently a Vice Chair of the Senate Democratic Caucus and the Vice Chair of the Senate Intelligence Committee. Warner earned most of his votes in urban and suburban areas of the state. His victory was not clear until a large number of votes from Fairfax County were reported. In that Beltway suburb, Warner won 69.93% of the vote. Virginia turned blue after 11 p.m. on Nov. 3. Warner made fighting to control the spread of Coronavirus a top issue this year. He is a supporter of the Affordable Care Act, public education, preserving the environment, veterans, and civil rights for all regardless of race, gender identity, religious affiliation or sexual orientation. Warner fights for jobs including protections for workers. Warner led a successful career in technology and business 20 years prior to running for public office. He founded the company that is now Nextel and invested in hundreds of technology startups helping to create hundreds of jobs. Virginia Numbers (Virginia Department of Elections, Nov. 4 at 12 p.m.)