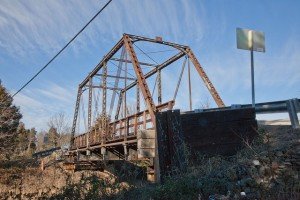 Citing corrosion of the structurally deficient 132-year-old truss bridge owned by Norfolk Southern Railroad, The Virginia of Transportation (VDOT) has reduced the weight limit on the one-lane Aden Road bridge from six tons to four.

“We want to make sure that any vehicles over four tons – such as fire trucks and school buses –are not using the bridge,” said Gary Runco, VDOT’s bridge engineer in northern Virginia.  "Until reconstruction begins next year, we are inspecting the bridge twice a month and are consulting with Norfolk Southern to determine if interim repairs can be made.”

The reconstruction project will reinforce the existing structure, which has been deemed to be structurally deficient, as well as add an additional lane to the existing single lane of Aden Road over the Norfolk-Southern Railroad, enabling two-way traffic.

"The existing truss will be rehabilitated and strengthened so that it can remain in service to carry northbound traffic on Aden Road," VDOT posted on the project page. "A new bridge will be built adjacent to the existing truss to carry southbound traffic on Aden Road; the truss will cross over the Railroad in its current location but Aden Road will have a new intersection with Marsteller Drive."

The existing wrought-iron truss bridge was built in 1882 by Keystone Bridge Company for the Virginia Midland Railway, and was relocated to its current location sometime between 1904 and 1928. The bridge is now owned by Norfolk Southern and is listed on the National Register of Historic Places.

VDOT will own and maintain both the historic truss and the new bridge after construction is completed.

For more information about the project and updates, residents can visit: http://www.virginiadot.org/projects/northernvirginia/aden_road.asp

Q&A with Farthest Corners' Austin House on Situation in Burma...