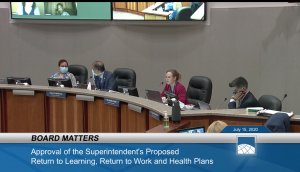 The Prince William County School Board did not pass its 50/50, 2-day-a-week, plan to reopen schools, which failed by a 4-4 vote, Wednesday night.

The board instead approved, by a 8-0 vote, a mainly virtual model for the first semester. It would include some in-personal learning for some special education students with Individual Education Plans, English Language Learners and perhaps some other vulnerable learning populations. The school division would constantly reevaluate with the goal of moving towards the 50/50 model.

Further information on the 100% virtual learning plan will be detailed in a separate article.

Potomac member Justin Wilk made the motion to approve the 50/50 plan with the caveat that they could revisit the situation in August. His proposal did not satisfy members Lillie Jessie, Adele Jackson, Loree Williams and Lisa Zargarpur. Instead, they passionately advocated for a 100% virtual model.

While board approved the 50/50 plan via a non-binding poll last week. However, since then, school board members teachers and staff  inundated school board members with emails. They shared how concerned they are about catching COVID-19 at work, becoming deadly ill or bringing it home to their families, friends and students.

Adults are at higher risk for contracting COVID-19 and PWCS employees did not want to have to choose between their careers and protecting their families. While parents can choose a virtual option for their children, teachers would have to return to in class teachings under an in-person plan, unless they had a medical exemption.

The vast majority of speakers during citizen time also advocated for the 100% virtual learning to protect against COVID-19. Riley O’Casey, outgoing PWEA president, said 90% of her members who wrote to her board said they are very uncomfortable returning to schools. Some said they were “updating their wills.” O’Casey spoke from home at her last meeting, saying she is awaiting her COVID-19 test results.

A few parents said while their children did want to return to schools, they really want things to return to normal. They do not want to go to school when they cannot eat lunch with their friends and have to social distancing and afraid of germs.

Supporting virtual learning was a matter of protecting school employees.

Lillie Jessie, the Occoquan member, a former elementary principal, said the administration should have included all school employees in their decision making, such as office workers, bus drivers, cafeteria workers and custodians, who are, "on the front lines." She said Superintendent Steven Walts did not even mention staff in what she called his “powerless” Power Point presentation. “I heard nobody talk about adult safety.”

She said she was so very happy teachers had the courage to speak out. "In fact, I was delighted," she said. "This is the most meaningful and impactful decision I’ve made as a board member. It is a decision to not put teachers, staff and members in harms members….It’s a no brainer.”

Adele Jackson, representative from the Brentsville District, a teacher and parent advocated for educators and students.

“In the end, I had to reflect on my 14-years in a classroom, and I don’t think we are ready to start the 50/50 plan….We are underfunded, understaffed,” she said. She added that part of the district is COVID-19 hot spot.

Lisa Zargurpur of the Coles District, said she is not confident that all the protections would be properly implemented by the opening date.

Williams explained virtual is the way to go even for underprivileged students. “I refuse to accept that my economically disadvantaged students cannot learn virtually, or we cannot find a way to help them.” Rather she said, many of her constituents are afraid to go to doctors. They may not take care of COVID-19 as they should.

She noted the Board of County Supervisors received $40 million from the CARES Act the schools could use to be better prepared during the pandemic.

However, some argued PWCS should be opening their schools in person in September, believing the school division would be ready in time.

Justin Wilk of the Potomac District defended his motion to open. “I will not put students and staff in harm’s way. I believe the division must prepare for both options,” he said. “The ultimate plan is to put our children in school.”

A former middle school civics teacher, he said he has always advocated for teachers’ raises and steps. He said he was offended by teachers and friends who said he would risk lives especially when his wife is a PWCS teacher and his children attend elementary school at PWCS.

Chairman At-large, Dr. Babur Lateef said they need to follow the best science: the recommendations from the CDC, and the state Board of Education.

“This is not an easy decision… I was elected to guide a school system that has a 1.6 billion budget, 12,000 staff members, 90,000 students…I don’t think anyone said ‘I want you to use your gut, your emotion, to guide this school system.’”

He wanted to know when everyone would be ready. If not Sept. 8, then when will people feel comfortable? October, November? He wants them to listen to to the health experts.

Member Jennifer Wall of the Gainesville District, defended the merits of the 50/50 plan, especially for, "parents who are not at home and children need those teachers." She said in addition to providing education school, teachers and counsellors play a role for the most vulnerable children who are unloved or abused. It allows them safety and support.

She also worries about those in the rural parts of her district who have spotty internet coverage and those who will not have the computer devices they need.

I’m not an educator,” said Diane Raulston of the Neabsco District. “I know that people have been calling me; they actually like this new system, this 50/50.”

After the motion failed, the school board members explored an alternate plan that would be 100% virtual for most students. The exception would be for special education students who had IEPs and vulnerable learning populations such as ELL