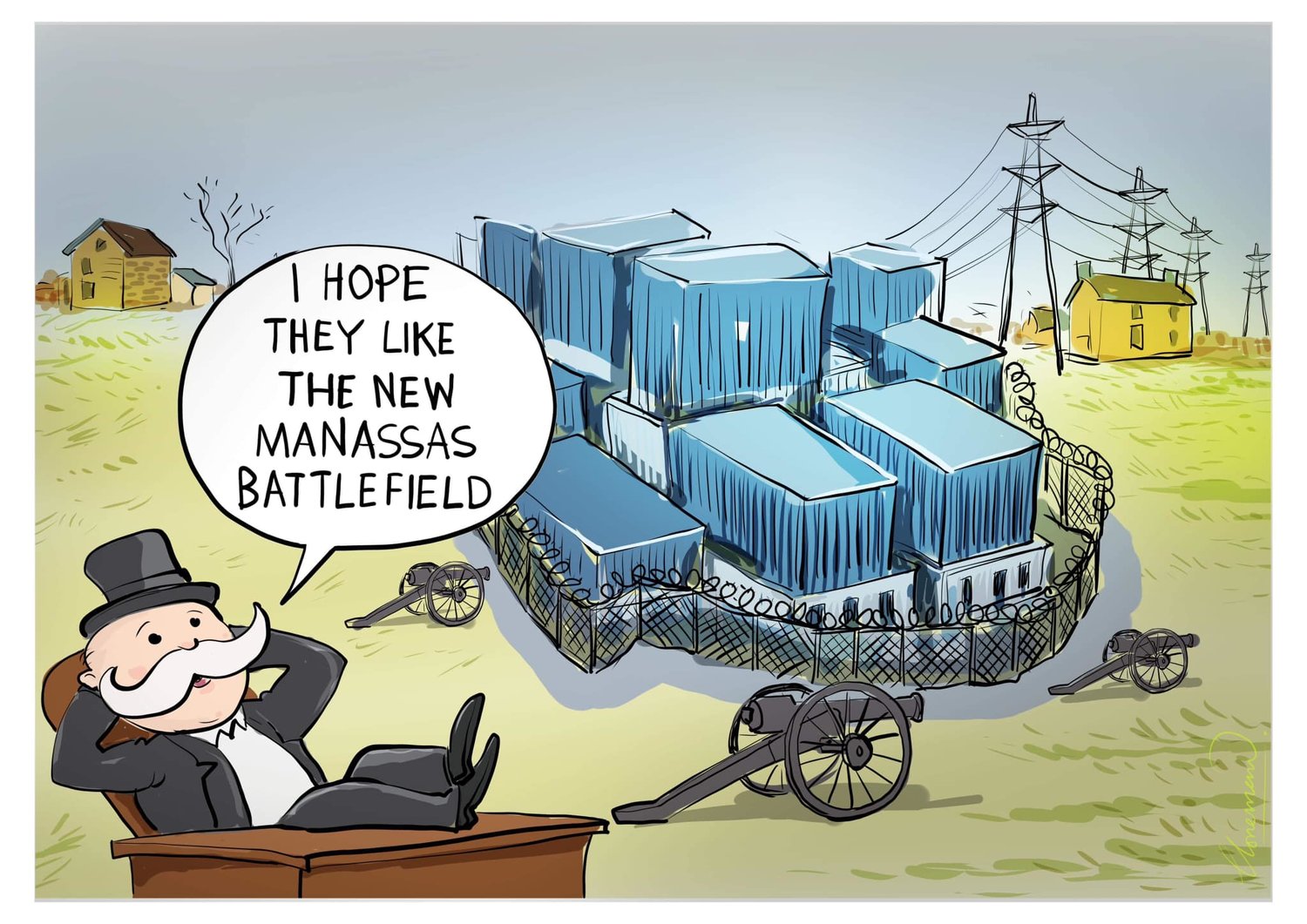 If this change in zoning is permitted, a few landowners will cash out big time, including Pete Candland, a Prince William County Board of Supervisors, who previously vowed to protect the Rural Crescent. Thousands of people, animals, historical reflection and the environment will suffer from a few people's personal greed as well as the County's. ”
Kathy Wilson, Gainesville

I am writing to express my strong opposition to the Prince William Digital Gateway Plan and implore you to step in and help as our calls have fallen on deaf ears in our county.

I attended the  Prince William County Planning Commission meeting this week but was unable to speak as were MANY of my neighbors due to the late hour of the meeting & the handful of residents who are being paid +/- 10X market value for their properties monopolizing the earlier speaking times by arriving hours ahead of time while most of us were still at work.

If this change in zoning is permitted, a few landowners will cash out big time, including Pete Candland, a Prince William County Board of Supervisors, who previously vowed to protect the Rural Crescent. Thousands of people, animals, historical reflection and the environment will suffer from a few people's personal greed as well as the County's.

We were told in the meeting that the cost for these infrastructures as well as additional electricity obligations would be paid for by the taxpayers.  Our taxes are high enough already and we do not want these!

Please read (available online) how the data centers in Loudoun County have not provided the tax revenue that was forecast & home values near these plummet/less taxes for the County to collect.

Loudoun County cannot keep up with the energy demands for its data centers.  They continue to have rolling blackouts up to 4 hours long.  Why would Prince William County want that for its citizens?!

The area on Pageland Lane is still rural by most standards.  If you haven't been out here, come take a look, enjoy the quiet, and see for yourselves what will be destroyed without your intervention and help!

At the Planning Commission meeting, five environmental nonprofits spoke - all against this change in zoning/placing data centers in this area. I guess the County and selling residents' only concern for the environment is if money isn't going into their wallets.

National Conservation Parks Association, in partnership with CEA Engineers, released a report showing the EXTENSIVE negative impacts the proposal for the data centers would have on our water quality and increase our flood risk. NCPA presented this report to the Prince William County Board of Supervisors in March of 2021.

Manassas National Battlefield Park is on record against this change in zoning with former Superintendent Biescalling it the "single greatest threat to Manassas Battlefield Park in nearly three decades." "Manassas National Battlefield Park strongly opposes this CPA because it is certain to have a substantial negative impact on historic resources both within and outside of the park that are significant to the battle" Changing the planned land use of these areas would inhibit the mission of the Park to preserve and honor the sacrifices of the 4,000 Americans who died at Manassas."

Both Manassas National Battlefield and Prince William Forest Park provide over $50 million in revenue to the County each year.  Datacenter creation will deter visitors from the park, which means less revenue.

Other nonprofits against this change in zoning/allowing data centers in this area:

In addition, there are over 50 HOAs that are against the data center creation - representing 85,000+ people.

In the meeting Wednesday evening, the Planning Commission was unable to answer basic questions about water issues & admitted it would take up to a year to perform a study.  Why would a plan be passed without this critical first step?!

The General Manager of Fairfax Water Authority wrote to Prince William County in March of 2022 (attached) "expressing reservations over this massive industrial data center complex. The development would convert rural Occoquan headwaters acreage to industrial use.”

“This will have obvious site-specific impacts and likely, but yet unspecified, secondary impacts.  Fairfax Water Authority called for a study of the full watershed implications of the Digital Gateway prior to PW County moving ahead.  The County is moving ahead with vague assertions that such a study will be undertaken even as it is pushing this massive project toward site development.  Expert public commenters pointed out that the long-term water implications would include polluted run-off, sedimentation, and chemical and other toxic pollution from the operations and materials in the data centers themselves."

Prince William County’s Planning department was unable to answer basic questions on water impacts that are of critical concern.

Data centers do not provide jobs for the community. They are built by teams that travel the country to these centers.

There are several other communities in our County that are suffering from the impacts of data centers near them. The noise level, (which the data centers claim is from air conditioning units, which are excluded from the noise code), is not from the air conditioning units but coming from inside, causing sleep deprivation.  Without sleep, our health fails, we cannot function at our jobs and our children cannot learn at school. And what kind of long-term impact studies have been done on data centers and our health? One would surmise that data centers can lead to increased cancer, the same way electrical transformers have been shown to do.

We are pleading that data centers be placed in locations already zoned as industrial and kept away from our homes, schools, and our parks. Please do whatever is in your power to convince Prince William County to stop this madness and protect the citizens!

This is an Opinion Piece that only reflects the opinion of its author, not of Bristow Beat or its sponsors or affiliates.

‘A Good Night for Incumbents’ in Virginia Midterm Elections