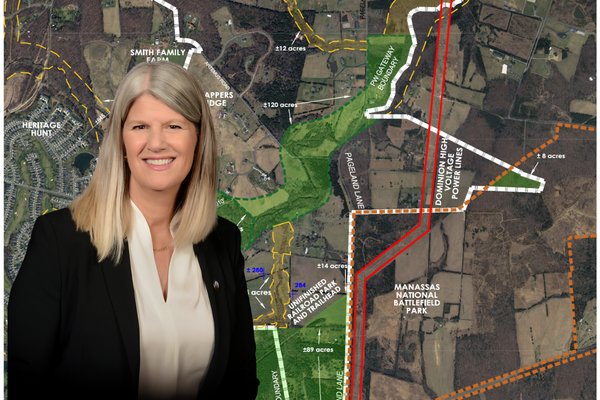 Chair Ann Wheeler-D of the Prince William Board of County Supervisors announced she will be delaying the board's vote on the Prince William Digital Gateway.  The vote was scheduled for Oct. 11, but Wheeler said it could be pushed a few weeks to clear up "confusion" about the proposal.

The Digital Gateway is +2,100 acres of rural land on Pageland Lane in Gainesville. The plan for the acres includes large data center parks that could hold up to 95 buildings plus natural parks and buffers.

Initially, the county proposed that 1,300 acres be reserved for parkland, buffers and historical preservation, but that plan has not been codified by the Planning Commission in its recommendation.

Confusion may have arisen from the fact that the Planning Commission recommended a version of the Comp Plan Amendment that included all of the applicant's requested changes. Those changes diminished some of the best aspects of the application.

The public was unable to review those amendments ahead of time because Compass's letter to the planning department was not published on the county website until after the Commissioner's meeting was completed. Some residents allege that other abnormalities of the Public Hearing constitute one or more violations of policy, which could be one reason for the delay.

However, Wheeler did not specify the Sept. 9 letter as her reason for delaying the vote.  Rather, she said there was confusion over whether properties along the 13000 block of Catharpin Valley Drive are included in the CPA study area, according to the Prince William Times article.

The Digital Gateway is a land use case of widespread and lasting significance for the county. It would designate land that has been concerned a part of the "Rural Crescent." Incursions have been made into the rural crescent but never to such a degree.

If the Digital Gateway is approved, other parts of the rural crescent will likely be up for grabs by developers.

It would also pave the way for Prince William to have the most data center parks in the country, surpassing that of Loudoun's Data Center Alley.

With data center development inevitably comes positive and negative outcomes. The positive would be the tax dollars, but the county will need to weigh that against environmental impacts, noise pollution, and mitigations the county or its residents would have to pay for, such as electrical use.

Finally, the data center park would have an impact on the Manassas National Battlefield.

Although applicants are proposing data centers in rural and suburban residential areas, space remains in the Data Center Overlay Opportunity Zone. Curiously, most proposals seek to build on the western end of the county, even as most neighbors have literally rallied against to data centers being built close to schools, homes and parks.