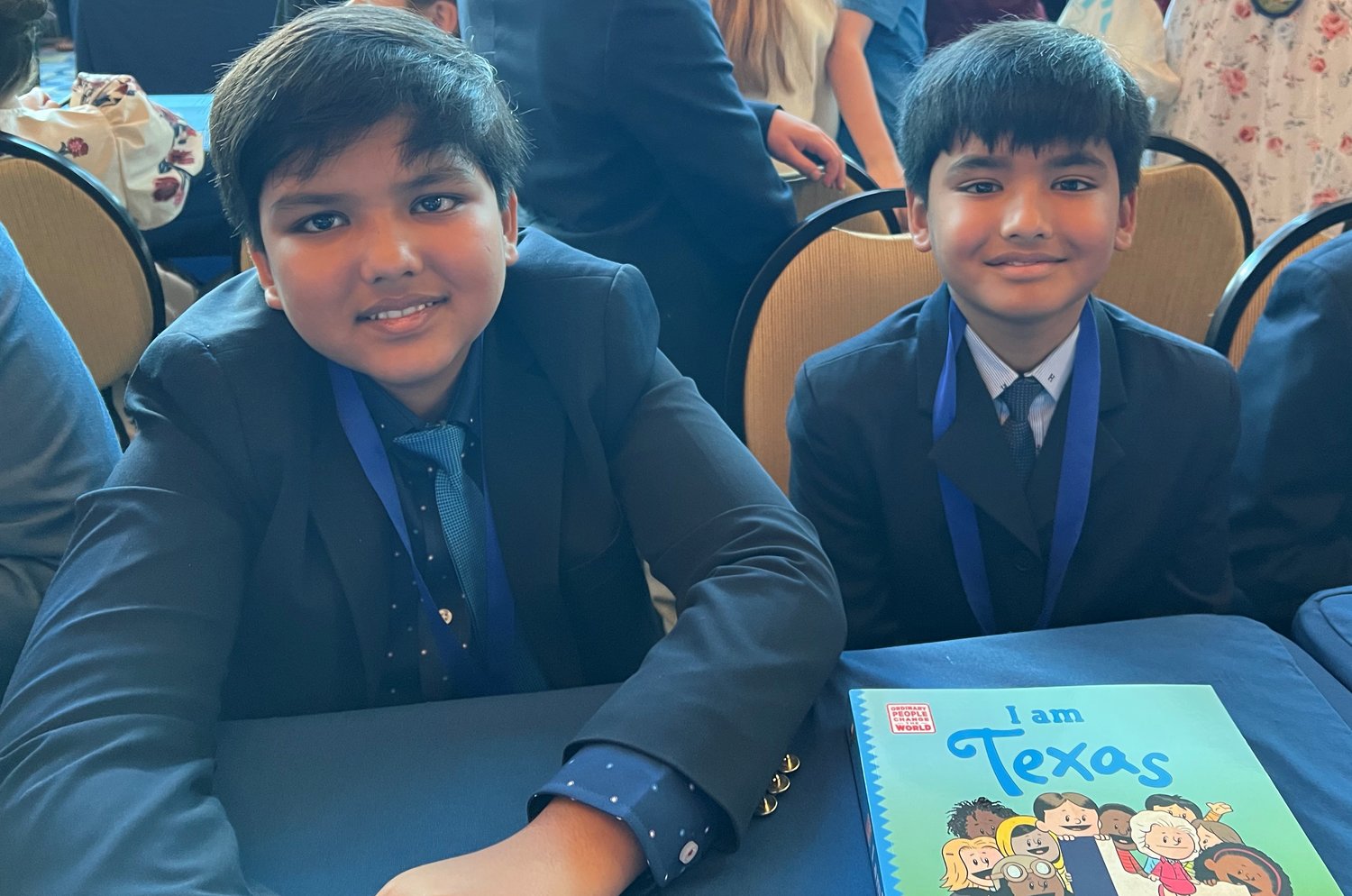 Brosthers Dhruv and Darsh Amitabh are excited to both have their short stories published in iWRITE's 2022 children's book, "I Am Texas," especially with it being the largest for kids by kids book in the world.
Shaili Priya Amitabh 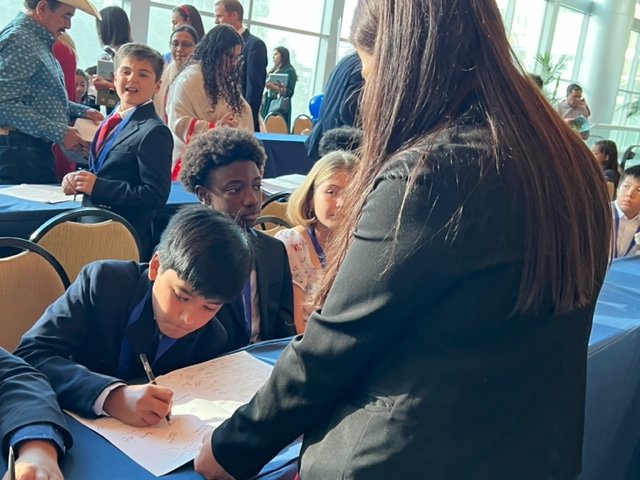 Darsh signs copies of a miniature version of "I Am Texas," in which his short story "The Tale of Two Brothers" is featured.
Shaili Priya Amitabh 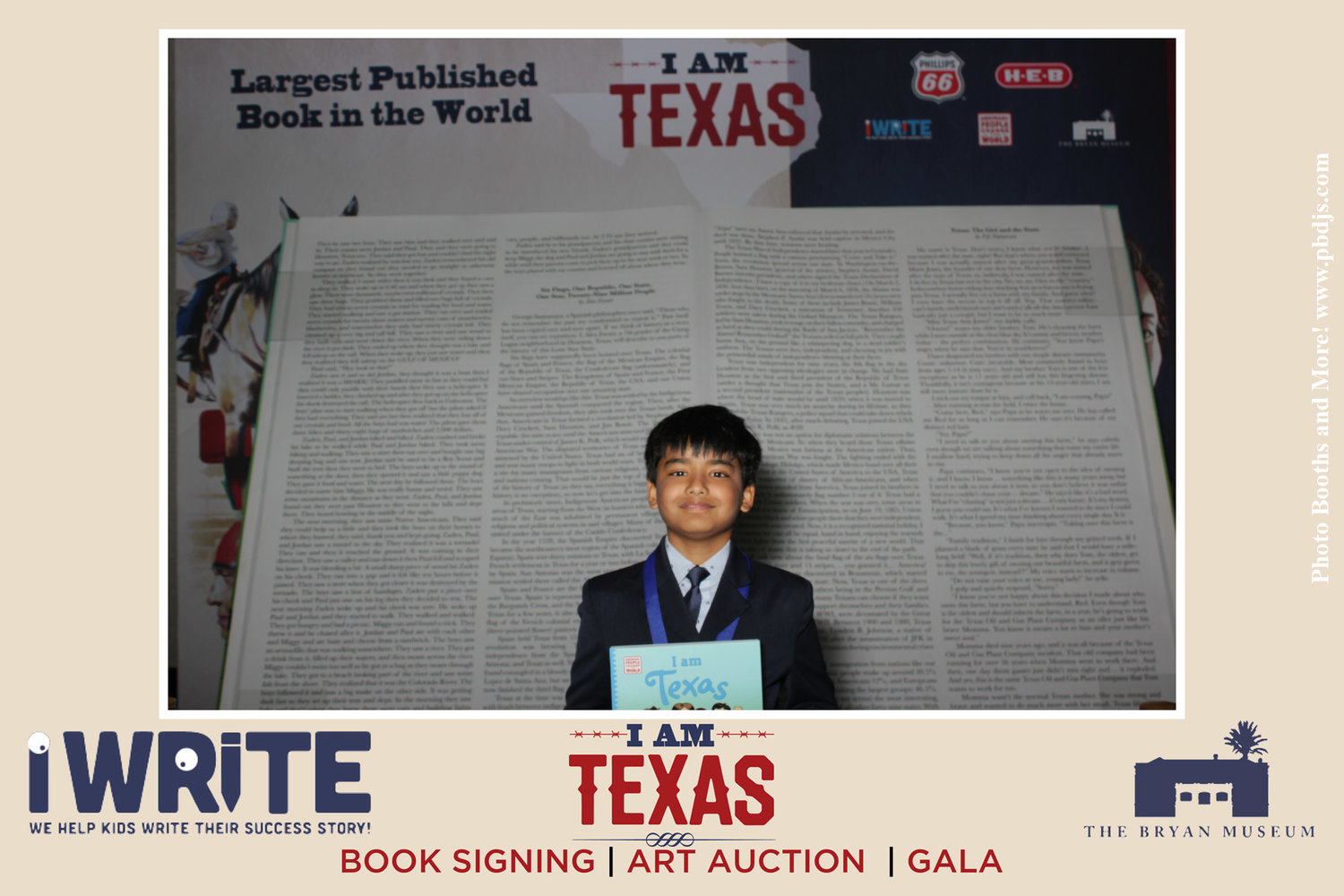 Darsh Amitabh, 10, stands in front of the 7+ foot book "I Am Texas," at the iWRITE awards conference.
Shaili Priya Amitabh 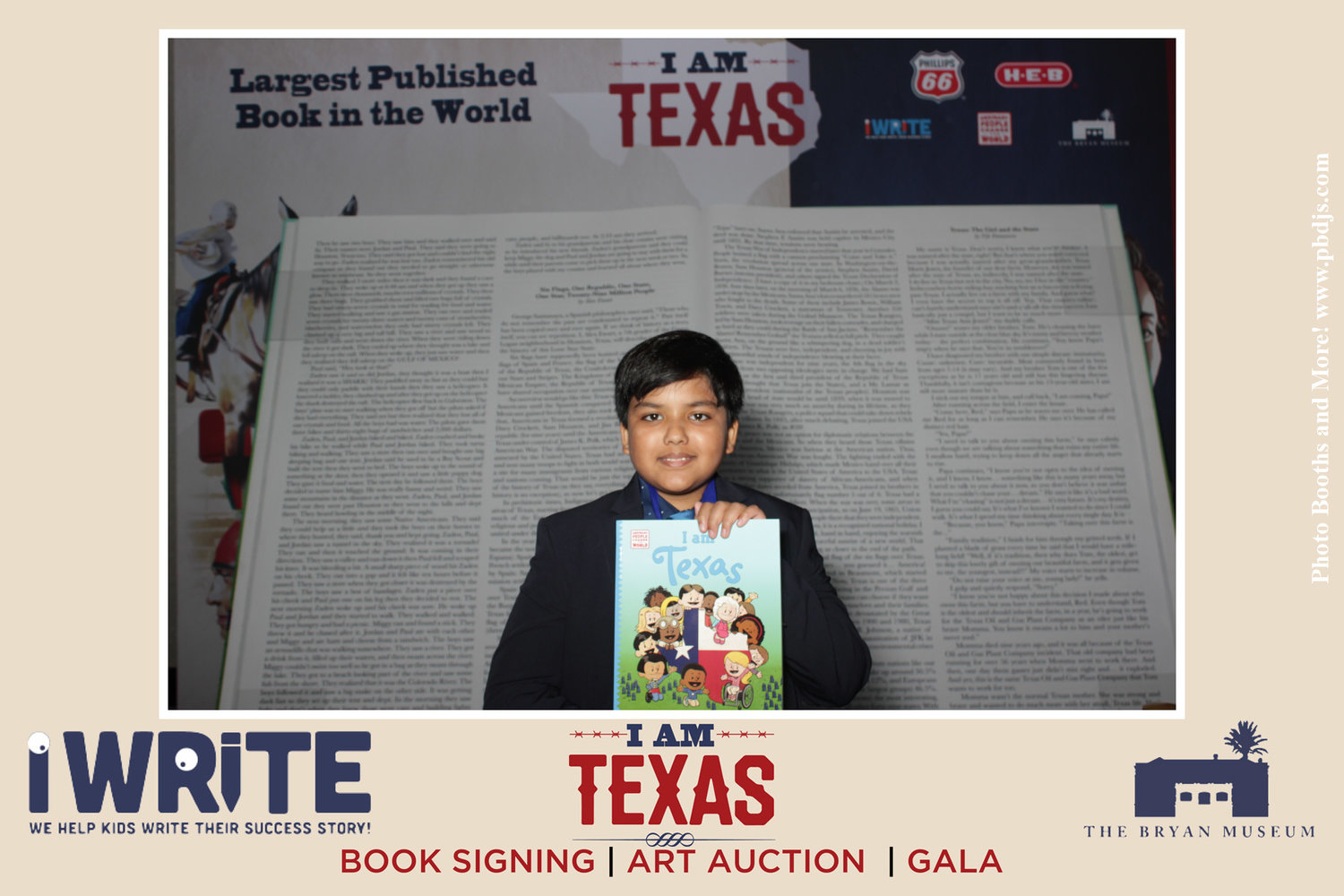 Bristow students Dhruv Amitabh, 12, and Darsh Amitabh, 10, had a big night to celebrate earlier this month. The brothers were two of the winning authors announced by the iWRITE Literacy Organization and Bryan Museum, whose short stories were published in “I Am Texas.”

The book, at 7.16 square feet, now holds the Guinness World Records™ Title as the largest published by kids for kids.

The Amitabhs attended iWRITE's Book Signing Gala at the Hilton of the Americas in Houston, Texas, Nov. 5.  As winners, they walked the red carpet, took pictures with the massive seven-foot book, autographed smaller editions for guests, and mingled with fellow award-winning authors, poets, and illustrators.

Dhruv’s short story entitled “The Wild Adventures of Christopher Wallace” and Darsh’s short story “The Tale of Two Brothers” were chosen amongst numerous literary entries from children across the United States.

"Winning the contest and becoming a published author is encouraging and gives me a sense of accomplishment," says Dhruv, a grade seven student at Linton Hall School, a private school PreK-8 school in Bristow. " I am proud to be one of the winners. This event allowed me to meet other talented authors, and now I want to continue writing."

“I felt honored to be among the winning authors, illustrators, and poets,” said Dash, a fifth grader at Linton Hall School. “To see my story published in the largest book in the world gives me confidence and fuels my desire to write.”

This was the second consecutive year the nonprofit organization iWRITE published one of Dhruv's stories. In addition to his two winning entries "The Frist Grade Field Trip," in 2021, and "The Wild Adventures of Christopher Wallace," published this year, to his credit, Dhruv has written many short stories. Dhruv also co-authored a  novel called “The One Who Started It All.”

The book signing event was a first-time experience for Darsh, and he was delighted to attend the event. He is turning out to be a prolific writer and has co-authored a fiction novel “Alexandria and Shadrack.”

"We are thankful to our parents, who have always encouraged us to write. This achievement motivates us to continue writing, and we hope to become an author when we grow up," said Dhruv on behalf of himself and his brother.

The writing/illustration contest, organized by the iWRITE Non-Profit Organization, encourages young aspiring authors, poets, playwrights, and illustrators to build their writing confidence and become published authors.  Each year, out of thousands of entries received, judges select 100 for a professional publication, and those students are honored at an annual book signing event.

This year was special since the iWRITE Organization and The Bryan Museum, along with New York Times bestselling author and illustrator team Brad Meltzer and Christopher Eliopoulos, set out to publish the largest book in the world by kids for kids and earned the GUINNESS WORLD RECORDS™ title. The book titled "I Am Texas" features 1000 authors, poets, and illustrators and will be displayed permanently at The Bryan Museum to celebrate the story of Texas from our next generation’s diverse perspectives. 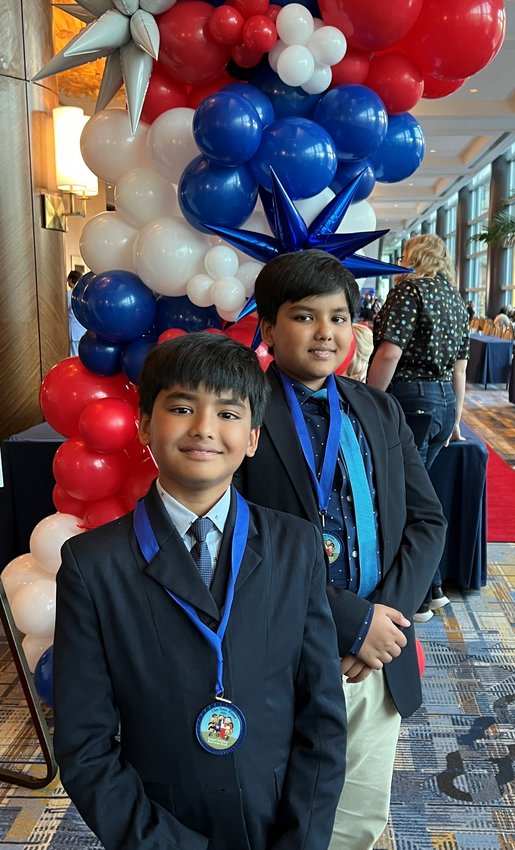 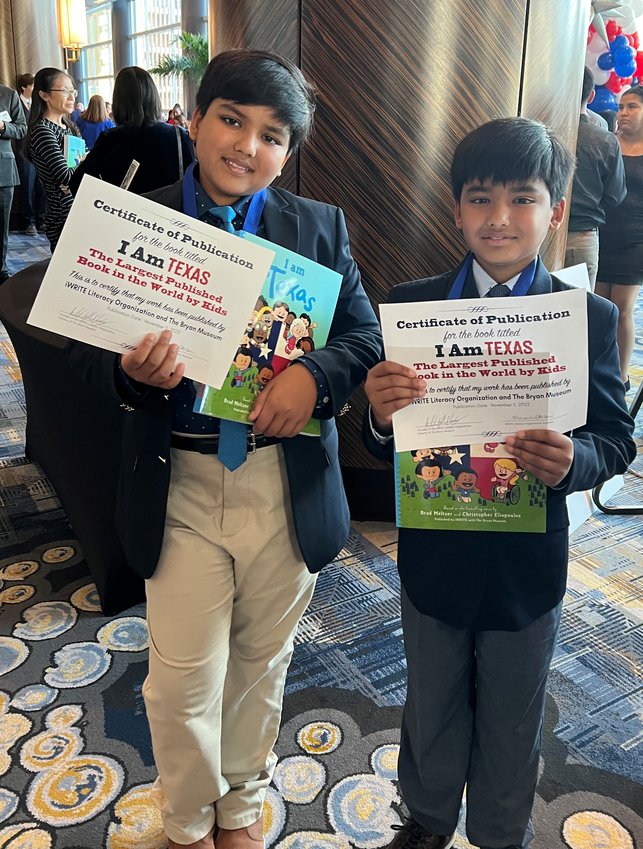 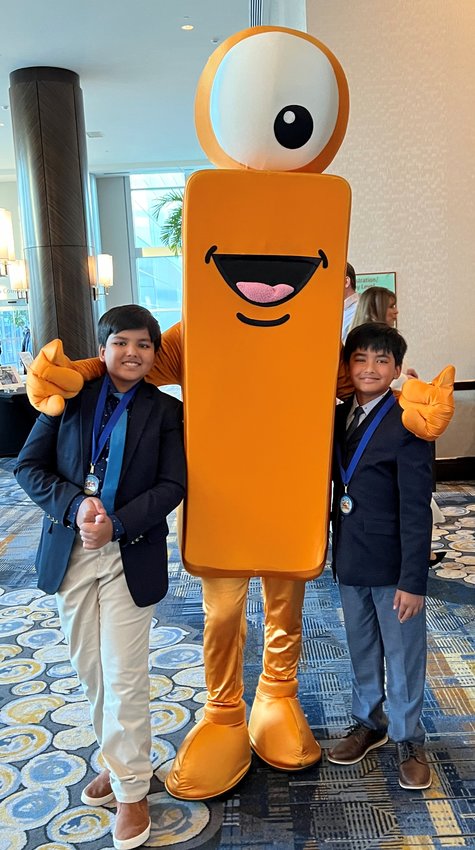 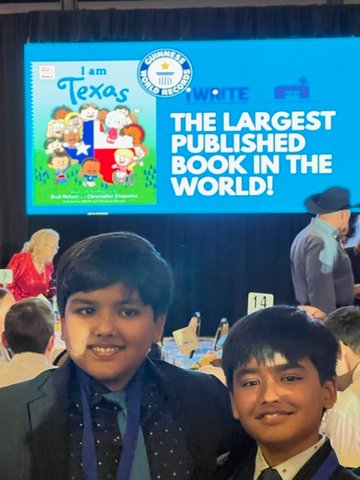 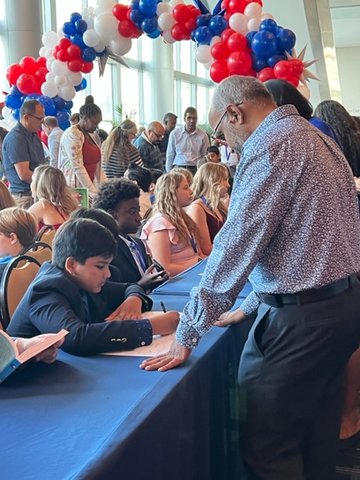