The statement proved controversial among some citizens 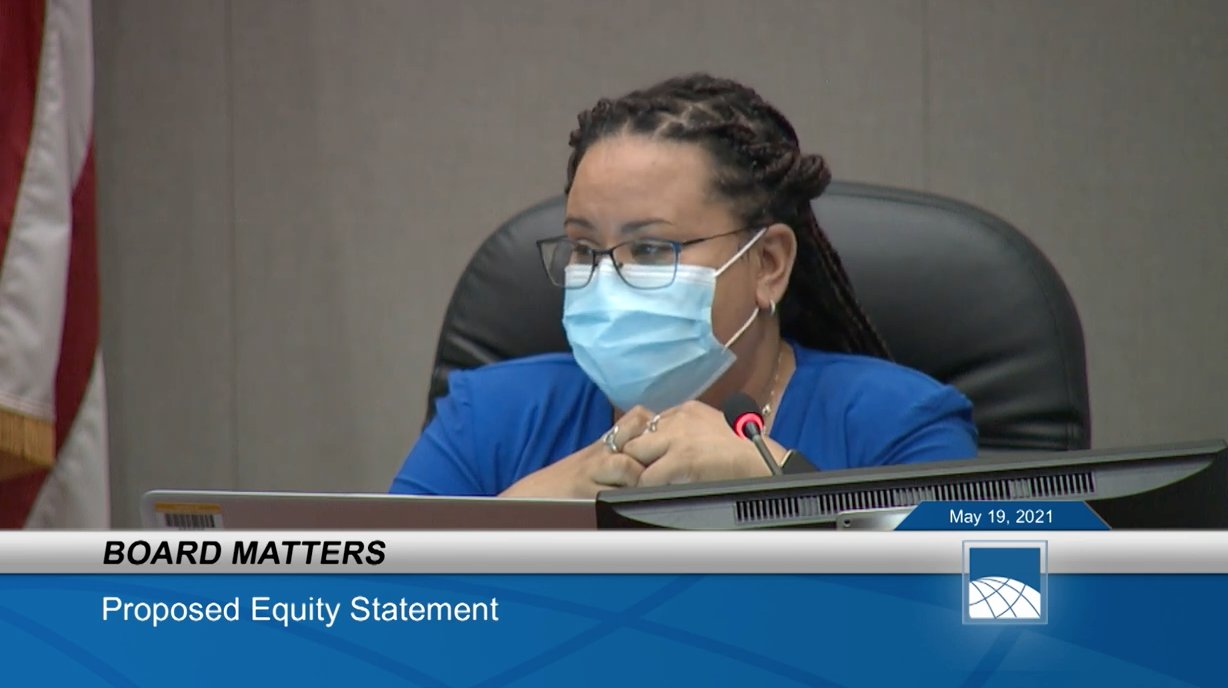 PWCS is committed to inclusive practices and equity to promote excellence for all. As a school community, our commitment to equity will be achieved by:

Providing all students and staff with access to resources, opportunities, supports and interventions, to ensure that they maximize their abilities and potential.

Providing all PWCS students and staff with resources and opportunities that align to their unique levels of need, to meet their learning, health, and safety requirements.

Raising the achievement of all students while working to eliminate learning disparities.

Engaging parents, guardians, and the community in Division and school programs to build connections, provide support, and foster relationships with the goal of ensuring our institutional, curricular, and instructional practices are more transparent and inclusive, relevant, meaningful, and supportive in the academic and social development of all learners.

Examining and revising our curricular and teaching practices to ensure that they are culturally relevant and representative of the achievements of our diverse community in order to meet the social and academic needs and expectations of each student.

Recruiting and retaining staff members who reflect the rich diversity of our community and who work to achieve equity and excellence for all students.

Preparing all students to succeed in a multicultural, global society by teaching the contributions and viewpoints of all people in culturally relevant curricula.

Along a 7-1 vote, the Prince William County School Board approved an Equity Statement Resolution, created by the Superintendent’s Council on Equity.

The resolution, passed on May 19, dedicates PWCS to providing necessary resources to the extent possible for everyone to succeed. It would include diversity in the curriculum. They will seek to hire a diverse staff. They ask the school division to reflect upon its systemic racism and staff members' implicit biases in order to address them. Read full document in breakout box.

The statement proved controversial among some parents and citizens on the western end of the county. They especially decried the mention of "systemic racism." Gainesville board member Jennifer Wall was the only board member not to support it.

The purpose of the statement, according to the board's own documents is "to demonstrate a commitment to dismantling racist beliefs and structures and promoting equity."

“We are throughly committed to making sure we are the best most competitive school division on the planet," said Chairman Babar Lateef, who supported the statement.

However, some citizens asked what they meant by "equity" and called the proclamation political, divisive, discriminatory, even "Marxist."

“This sounds like equality not equity. Equality means everybody gets the same opportunity, what they do with those opportunities is up to them,” said a Haymarket woman. “This statement is basically garbage. You are destroying the school system… it’s cultural terrorism.”

“Qualifications no longer matter, only skin color?" asked one person. Others echoed his sentiment.

Some agreed it is discriminator, racist and possibly illegal to look to hire someone based on skin color.

One woman of color said this may be laying the groundwork for Critical Race Theory, which she detests. She said it “perpetuates stereotypes” and “causes exactly what we are trying to prevent.”

She said she does not want her children to feel the “weight of their skin color dragging them down," nor be seen as "disadvantaged."

Gainesville board member Jennifer Wall said there is much she likes in the statement, such as providing resources and engaging parents.

However, she said PWCS does not have “systemic racism.” She said that is a big assumption to make without evidence.

During citizen's time, one Woodbridge woman said it is about time this is being addressed. She is an educator and she decided to home school her children because of the racism they experienced in Prince William County Schools years back, which no one would address.

Occoquan board member Lillie Jessie, an African American and former PWCS elementary principal, said, "for me it's for closing the gaps." She said they never hold anyone back, they try to push everyone to help everyone excell.

However, she voiced her concern that parents do not know their definition of equity, and that they should define it. And, she believes parents have a right to ask, "what comes next."

"Equity means different things to different people. I will ask the committee to define equity, because I think you deserve that."

She also asked that facility services be added to the statement at some point even as she does not see PWCS as "systemically racist."

Williams demonstrated the most passion for the statement.

She explained that the statement is not – as some have accused- about making all outcomes the same. It is about providing everyone with the tools to succeed. It is not only about skin color; it is about fair access for all students because everyone has differences.

"I’m not asking you to change your personal beliefs, but we are the public school system. It is our obligation. Students now across the board do not have the same opportunities. Period."

"When you talk about culturally relevant curriculum, we have a very narrow view on what we teach students. It should be a wider view because everybody has a right to learn about their history...On all sides.”

Other school board members explained that the statement was a step in the right direction.

He said the school division recruited him from Michigan, and asked if that was "discriminatory."

Diane Raulston, Neabsco District, explained it was also personal for her. She faced discrimination as a child, but she also asked for a definition of equity.

Lisa Zargurpor, Coles District, said as a teacher she'll admit her students have taught her about their cultures, enabling her to be more culturally accurate and sensitive. She appreciates that.

Student representative Caroline Silvera, said she does not get a vote, but “the power that I hold is in my voice.”

She noted how this year the school division paid for students’ SATs and provided bus transportation for those who needed it. “I think that personally, it helped a lot of students.”

In response to some parents, Williams said that Equity is not just a liberal fad.

“The equity movement is here to stay. It’s at the national level, at the state level and it is now coming down to our local level….We didn’t make this up…We’re doing what we need to do for our children, and that means all children.”