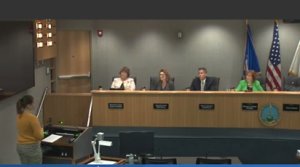 Much has already been said about the Prince William Republican candidate for Chairman of the Board of County Supervisor John Gray's offensive Tweets discovered by Democratic candidate Ann Wheeler and first reported by the Washington Post last week.

While the comments seemed cruel towards many minority groups: women, African Americans, Latinx, LGBTQ people and Muslims, in a sense without specific targets (other than Hillary Clinton), some may have shrugged it off as simply a lack of political correctness.

Tuesday, that changed as one young woman’s statement struck a chord with several supervisors, which led them to condemn Gray’s Tweets. Coles District Supervisor Marty Nohe, who lost to Gray in the Republican primary, made a long speech on what it means to be fit for leadership.

At Prince William County Board of County Supervisors meeting, Oct. 1, Katelyn* a survivor of sexual assault, shared her trauma during citizen’s time. Her PTSD includes night terrors and she now sleeps with a companion dog after being raped in her own bed.

Katelyn said she was “absolutely horrified to learn that a candidate for chair of county supervisors thinks rape survivors should be shamed into silenced.”

Ok, rape victims, it’s enough already. Will the 3 people left in government and Hollywood who haven’t been sexually harassed in the last millennium please raise your hands so the rest of us can get on with our lives. You are all so full of yourself that I want to puke.** 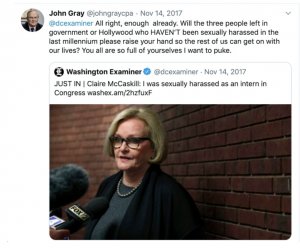 This may be the Tweet the young woman was quoting. However, this one does not mention "rape victims."

“Well, the sad thing is I cannot get on with my life,” she said. “I will actually have PTSD for the rest of my life….Do you have daughters, do have mothers?” she asked. “When you look at me do you want to puke?”

“Do you stand with rape culture?” she asked, “or do you stand with the survivors? Will you allow this man to be on your board? Will you sit beside him day in and day out knowing that this is truly in his heart?”

“John Gray is the one who should make you want to vomit, not us.”

Wednesday, Gray doubled-down on his comments. 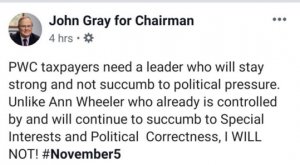 PWC taxpayers need a leader who will stay strong and not succumb to political pressure. Unlike Ann Wheeler who already is controlled by and will continue to succumb to Special Interests and Political Correctness, I WILL NOT!

But if Gray was not moved by Katelyn's statement, it prompted a response from five supervisors, a few of whom had been previously reluctant to comment on the incident.

Caddigan immediately responded to Katelyn from the dais, thanking her for her bravery and sharing her story. "Shame on you," she said to Gray.

Katelyn’s friend replied that she had never shared the story publicly before.

Nohe said he had refrained from commenting on the Tweets as not to look as though it was a matter of “sour grapes." However, he said he was moved by the speaker's extraordinary courage to speak before the board.

He highlighted some of her comments that resonated with him, such as the importance of tone, language and “how we treat one another,” and “the way in which people who would aspire to be leaders…. interact with the community around them.”

He said the responsibility to be civil is "magnified" for those in leadership positions. He also said the unwillingness to own one's past mistakes, “is a real reflection on the judgment that (they) will have in the future.”

And said how words have real effects on victims of crimes or hatred.

“They are re-victimized. They are forced to think again about the day they were victims and they felt helpless. That is unfair to them and it does not constitute good leadership.:

He commended Katelyn for her courage. “I hope she never stops showing that kind of bravery or that kind of courage... it is a gift that she has, and we need more people who are willing to stand up to that.

Lawson said she was likewise moved by Katelyn’s statement. “She impressed me greatly, and she also broke my heart at the same time.”

She said she will break with her practice of not commenting on the “insensitive stupid things” politicians say or do on the federal, state or county level. “I absolutely reject the Tweets that were revealed last week by John Gray.”

Candland said that he wishes the civility could return to politics. Personally, he believes everyone is just trying to serve their community in accordance with their own beliefs.

Anderson said she had already published a response but she certainly disavows Gray’s statements. She said that inappropriate comments have been made by members of both parties even some aimed at her.

*We are with-holding Katelyn's last name from the article.

**We are not quoting the syntax of the original Tweet.