'A Crane Named Steve' is Now Available on Amazon 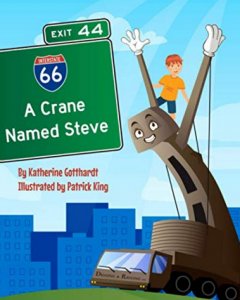 After being located on I-66, the crane owned by Maryland-based Digging & Rigging, Inc., became hit due to its shape that resembled a robot.

Digging & Rigging, Inc. subsequently put a name-tag on the crane, much to the amusement of not just the community, but the local and national news.

Inspired by the way the crane seemed to bring disgruntled commuters together, Gotthardt decided to write a children’s book featuring the crane, proceeds to be donated to local charities.

“The idea of Steve doesn’t really belong to any one person. He came from the community. So I think it’s appropriate that anything we do with Steve goes back to support the community,” said Gotthardt.

Gotthardt, who also has a background in education, approached Digging & Rigging, Inc. about authoring the book.

“They were extremely receptive and have been great to work with,” Gotthardt said. “They have community days where kids get to ‘touch a truck,’ so a children’s book is just perfect for their community outreach as well.” 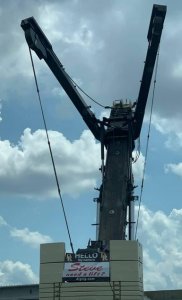 Steve, the Digging and Rigging crane, as seen from Interstate-66 in Prince William County, Virginia.

Digging & Rigging agreed to publish the book, and Katherine reached out to those in the community to lend their talents towards the project.

Gotthardt was thrilled that Patrick King of Imagine agreed to illustrate it.

“When I approached Patrick, I couldn’t believe my good fortune when he volunteered to do the illustrations. But then, knowing his history of community service, it makes perfect sense.”

King’s award-winning website, graphic design and branding agency was most recently involved in launching the Prince William Food Rescue program to support non-profits like Action in the Community through Service (ACTS) that have food pantries. He is known for supporting a variety of non-profits and the arts and is a board member of several community organizations.

“There are few things more important than fostering a love of reading in our children. I’m honored to be a part of this project and I hope it brings happiness to the kids that read it,” King said.

Gotthardt is very excited the book is now on Amazon in time for the holidays. Not only will it make a great gift for any child, but also because the proceeds can go towards helping those in need in the community.

ACTS is the first nonprofit A Crane Named Steve will sponsor. “That is especially meaningful when it comes to supporting charities that help during what can be a particularly difficult time.”

And the book is about something all too common in Northern Virginia: relocating. Gotthardt thinks it is a theme that will resonate with parents and children no matter what roads they travel.

“I think many parents and children have experienced what it’s like to have to move when you don’t want to. Parents know how hard it is, especially if they have experienced it for themselves. It’s a reality, but it’s hard to get a child to understand that. That is where Steve comes in.”

The book also poses questions such as how traffic affects the quality of life and what can we do to fix it?

And Gotthardt, who is also a poet, wrote the book in verse. She believes parents and children will enjoy the rhyme and rhythm it offers.

Gotthardt is very excited "A Crane Name Steve" has been made available to the public. It will be coming soon to local bookstores such as Prosperos Books in Manassas.