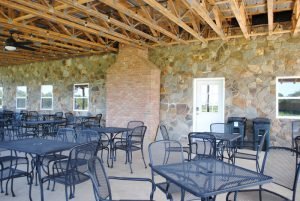 Residents may be able to celebrate this Memorial Day on the patios of Prince William restaurants, wineries and breweries, after all.

The Prince William County Board of Supervisors voted 5-3, Tuesday, to seek approval from the Governor to allow outdoor seating at county dining establishments, beginning Friday, May 22.

The idea is to allow county restaurants to make money over the Memorial Day weekend. The openings would continue on, as the county is scheduled to enter Phase I the following weekend already.

The rule would apply only to those establishments that have permits allowing for outdoor seating. Those restaurants would have to maintain 50% occupancy and adhere to other Virginia 'Safer at Home' guidelines as dictated by the Governor.

While most of Virginia entered into Phase I easing of COVID-19 restrictions, Chair Ann Wheeler  (D) had Prince William County join  other Northern Virginia jurisdictions to delay Phase I easements until May 29. Northern Virginia jurisdictions have been hit hardest by COVID-19 cases and elected officials wanted to make sure their communities were properly prepared if less social distancing led to a spike in cases.

Despite the eagerness to get the economy rolling, Wheeler said she could not support breaking the delay.

“I’ve seen the data. I think it is irresponsible,” she said. “I’m  not willing to put people’s lives at risk when the data isn’t going in the right direction.” 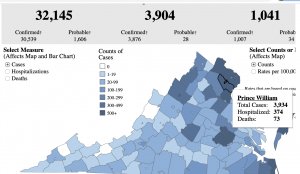 Image from Virginia Department of Health shows there have been 3,934 cases of COVID-19 in Prince William County as of May 19.

In comparison to more rural areas of Virginia, the numbers in Prince William are alarming. The county has had 3,934 cases, 374 hospitalizations and 73 deaths as of May 19.

“We take responsibility in what happens moving forward.” She said she too supports local businesses. “I support them in the longterm,” and doesn't want them thought of as “hot spots,” for the virus to spread. “I call on this board to be responsible next time.”

Wheeler said that although she did not vote for the early opening, she will draft the letter on behalf of the board. The supervisors seek an answer from the Governor as soon as possible.

Even though most of Virginia began Phase I on May 15, and it was Northern Virginia leaders who decided to delay their openings, it is not certain the Governor will grant the board's request.

Governor Ralph Northam has reiterated the need to keep Virginia united. He praised Northern Virginia leaders for banding together as a region, saying he does not want reopening dates to confuse people, nor does he want people to travel out of their neighborhoods for food and entertainment.

The Prince William Supervisors are not requesting full entrance into Phase I of easement. For instance, they are not requesting they allow 50% occupancy in nonessential retail stores. Northern Virginia is scheduled to enter into that phase on May 29.

Bristow Beat will update once the Governor announces his decision.