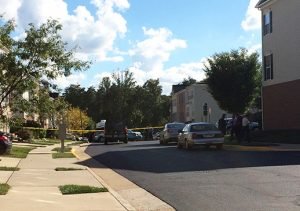 Police investigate the scene on Hatzell Hill Lane in Villages of Piedmont.

"The decedent was identified as Ruben Urbina, age 15, of Haymarket," said Prince William Public Information Officer, Sgt. Jonathan Perok, referring to the teen shot by an officer, Sept. 15, after brandishing a crowbar.

Police later revealed that the boy had called 911 himself, saying he was holding his mother hostage and would not mind if police shot him.

Details of the 911 call and police response.

"On Saturday, September 16, an autopsy was performed by the Medical Examiner’s Office which confirmed both rounds fired by the officer struck the deceased, resulting in his death," Perok said.

According to Prince William Police, the investigation revealed earlier that morning, Ruben made comments to his mother implying that he wanted to tie her up with a telephone cord. He became increasingly aggressive, at which point, the mother went to another room of the home to get assistance from Ruben’s brother and a female who was visiting the residence.

The brother and female acquaintance encountered Ruben in the garage area where they attempted to calm him down. Ruben told them he called police and wanted officers to kill him.

"During that encounter, Ruben pulled out a knife and made threats towards them," said Perk. "Ruben then located a crowbar in the garage and continued making threats. At this point, the first responding officers began to arrive."

The investigation further determined no hostage situation had occurred and that the family was unaware Ruben had initially contacted police. A Prince William County Police EOD-trained K-9 and explosive technicians from the Virginia State Police conducted a thorough check of the home for any possible explosives. No explosives were located.

Officers have responded to the residence in past for unrelated calls for service prior to this incident; however, have had no prior encounters with Ruben.

The two officers involved in the initial response to the residence were not assigned a Body-Worn Camera. The Police Department began issuing Body-Worn Cameras, in conjunction with training, at the beginning of September and will continue this process until the end of the year.

Upon reviewing the actions of the officer involved in the shooting and the details of the investigation as described above, Prince William County Commonwealth’s Attorney, Paul Ebert, ruled the shooting was justified.

Prince William County Police Chief Barry Barnard commented, “As we continue to evaluate this incident, it seems at this stage in our administrative investigation, the officer acted appropriately in response to dynamic circumstances. This is undoubtedly a tragedy and we recognize the loss of this life is extremely difficult for the family and our community. Officers are often placed in situations where they are forced to make critical decisions quickly based on limited information. This shooting was traumatic for the officers involved and we ask for continued support from our community as we move forward.”

The Prince William County Police Department’s Office of Professional Standards is continuing an independent administrative investigation into the shooting. A final review of the incident will be conducted by the Department’s Use of Deadly Force Review Board, which will examine all aspects of the incident. The Board will determine if the shooting was within policy and will make any considerations as needed based on their findings.

The officer involved in the shooting was identified as Officer Robert Choyce, age 35, a 7-year law enforcement veteran of the Prince William County Police Department. He is currently assigned to the Tactical Training & Response Unit and has not been involved in any previous officer-involved shootings.

"The Police Department recognizes the sensitivity of officer-involved shootings and the public’s interest in remaining informed as to the circumstances surrounding incidents when deadly force actions are used by the police," said Perok. "We remain committed to conducting a thorough investigation when these incidents occur and appreciate our community’s patience while we gather and process information."

The Department is evaluating this incident and will continue to release any additional, pertinent information related to this investigation as needed to keep our community informed.

Details of the incident have been previously published.