Team to wear no. 22m, fundraise for local charity 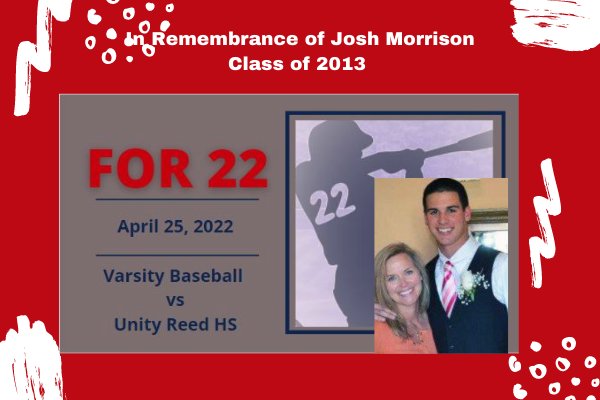 "Please consider coming out to Patriot High School for our FOR22 event on 4/25. We will be hosting a game against Unity Reed that night and will recognize a member of our first graduating class (2013)," said Gabe Bigbee, of the Patriot Leadership team. "Josh Morrison was a member of our baseball program and was a founder of our Red Nation spirit group. He had also accepted a scholarship to play baseball at GMU."

Morrison was critically injured in a car wreck on Christmas Day in 2013. He died in the hospital a week later, at the age of 19. News of Josh’s death shook the community. The Patriot Pioneers Baseball Team retired Josh's jersey, number 22. On April 25, 2022, the team will wear his numbers again.

“In honor of him, on that night, our entire baseball team will all wear #22, and we will unveil a special commemoration for his mother, who will return to the field for the event," said Bigbee.

Attendees are encouraged to wear Josh's number by purchasing a FOR22 shirt. All proceeds from the sale of FOR22 shirts will be donated to the Sweet Julia Grace Foundation.

A Bristow mom Sara Knight founded SJGF to honor her daughter Julia, who passed away at the age of 12 in 2013. The nonprofit helps make the dreams of critically ill children come true and offers support for families of sick children.

While Josh Morrison attended Patriot a decade ago, his legacy lives. Patriot students not only know Josh from Red Nation, but they aspire to be the kind of student, athlete, and person that he was.

“Josh was a great kid, always smiling, happy, and willing to make everyone feel welcome. He was a great person and an outstanding athlete," said Bigbee.

Readers can preorder their FOR22 t-shirts here.

T-shirts can be shipped to those who do not attend Patriot High School, nor have students attending the school.  Shirts can also be purchased at the game.