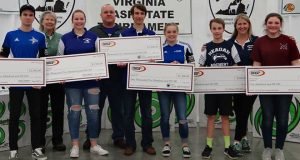 PWCS archers can put a feather in their caps. Overall, 18 students from the Haymarket area qualified for nationals on their own merit, finishing in the top 10 for males and females at the state championships held in March.

Nine were among the top three finishers in three competitions, contributing to their teams’ championship titles. The championships are sponsored by the National Archery in the Schools Program (NASP).

In the Scholarship Shoot Off, three students earned scholarships and trophies. Ashleigh Kraemer, Battlefield High School, finished as the number three female, but won the top scholarship of $2500. She and another female were tied after the first round of the shoot off, so they had a 1-arrow-closest-to-the-middle shoot to break the tie. Alex Kuzmicki, Battlefield High, came in as the top male but finished with the second-place scholarship for $1500. Gabe Hyde, Reagan Middle School, was the only middle-schooler competing. He was number three male overall, and earned $500 in the scholarship shoot off.

Haymarket Elementary School student Leea Choi, a member of the Reagan team, finished as state champion. She shot a 200 in practice last week and a 252 at the tournament to win. In this division, Reagan Middle female archers finished as follows: 2-Naomi Heilen, 3-Alexandra Williams, and 4-Ella Brazy; among male competitors, Cody Lawhorn was the state champion and the tournament’s top archer, with Aiden Donohoe coming in fifth.

In the Bullseye competition, Reagan won its second consecutive state championship and Battlefield finished second in the team competition by 14 points.

“Reagan's score of 3399 is a state record and that score would have finished second at Nationals and won Worlds last year,” Bukva said.