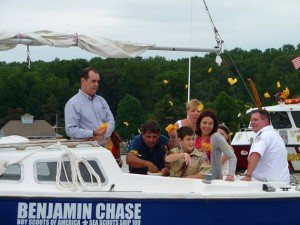 Local scouting organizations gathered with the families of two boys killed in the Newtown, Conn., tragedy for the christening of the Sea Scout tribute vessel, "S.V.  Benjamin Chase,” at the Leesylvania State Park Marina in Woodbridge, Va., Saturday.

Ship 100 had a new sea vessel to name right around the time of the Sandy Hook school shooting. Skipper Todd Skiles of Bristow said he saw a photo of the two empty Tiger Scout caps on the news that reminded him of his time as a Tiger Scout leader, which he said he loved.

“Everyone remembers the boys in those orange shirts one size too big.” Skiles said, reminiscing fondly about how the boys climbed all over his furniture and wrote on his walls. 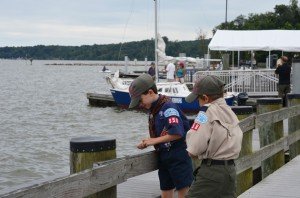 Thinking of this, Skiles recommended they name the boat after the two Tiger Scouts killed at Sandy Hook, 6-year-old Benjamin Wheeler and 7-year-old Chase Kowalski.

Skiles said he felt this gesture was important because after a tragedy, people tend to remember the name of the killer and forget the names of the victims.

“I can’t memorize all their names,” Skiles told Bristow Beat, “but I will remember those two. I will make those two the faces I remember.”

He suggested his troupe dedicate the '22 Catalina the “Benjamin Chase.”

At the time, Skiles did not know if, or how, the boys' families wanted to be involved, but he sent a “crazy letter to Connecticut,” asking permission to name the boat in the boys’ honor. 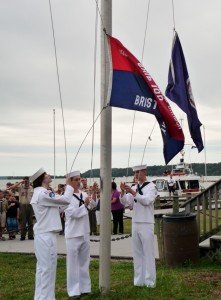 Sea Scouts present the colors at the opening of the christening ceremony. (Shay Seaborne)

The Wheelers and Kowalskis said yes, and asked to be a part of the boat christening, which was made up of materials from this website; so Skiles planned a ceremony.

Between 20 to 30 guests from the boys' families arrived for the ceremony, including Benjamin’s parents David and Francine Wheeler and their son, and Chase’s parents, Rebecca and Steven Kowalski and their family.

Sea Scouts, ages 14-21, said they were honored to play a part in such a momentous and important occasion.

“It’s not something you wish to have to do, but it’s a really great way to celebrate the life of the boys and a chance to look back at the organization and be thankful that we have an organization that lets us do what we like to do the most,” said Macy Blakely of Ship 1942. 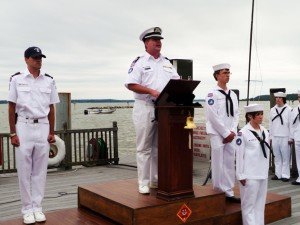 Sea Scout Ship 100 Skipper Todd Skiles explains the troupe's motivation for naming the ship in honor of Benjamin and Chase as ship leaders and members stand at attention. (Shay Seaborne)

Sea Scout Kayleigh Mancini of Bristow said she was personally surprised the families traveled all the way from Connecticut but was honored the tribute her organization arranged was so meaningful to them.

During the ceremony, Sea Scouts presented the colors of the American flag, Virginia State flag and Scouting flag. They said a prayer to bless the vessel, recited the Boy Scouting pledge and rang the ceremonious solemn bells eight times in honor of Benjamin Wheeler and Chase Kowalski.

Skiles told the audience they plan to sail the ship up and down the Potomac River past national monuments and homes of presidents. Everywhere they go, he promised they would tell the story of Benjamin and Chase. 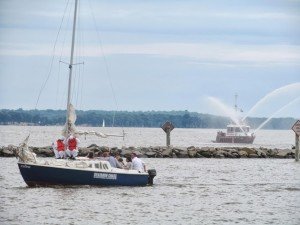 While the family accompanies Ship 100 members to scatter rose petals along the Potomac River, the Fairfax County Fire vessel sprays water in honor of the boys. (Photo Credit: Peter Stark)

The boys’ parents were presented with plaques engraved with the names and images of Benjamin Wheeler and Chase Kowalski, and the original plaque is installed in the cockpit of the “S.V.  Benjamin Chase.”

After christening the boat with a bottle of Perrier, the immediate families, along with the Skipper and two Sea Scouts, took the S.V. Benjamin Chase on its inaugural sail.

There along the Potomac, they scattered the petals from 26 yellow roses to represent the victims at Sandy Hook Elementary School that day in December. Others followed in secondary vessels.

After the ceremony, people stayed to eat and chat. The families were also given time before the official ceremony to have a private ceremony in honor of their boys.

Skiles thanked the many organizations and people who helped to make the ceremony possible: the Knights of Columbus, Woodbridge Sailing School, Quantico Yacht Club, Chesapeake Flotilla and others.

Ship 100, the troupe that dedicated the vessel, is composed of teens from western Prince William County as it is run out of Holy Trinity Catholic Church and is sponsored by the Knights of Columbus Our Lady of Rosary Council #12982.