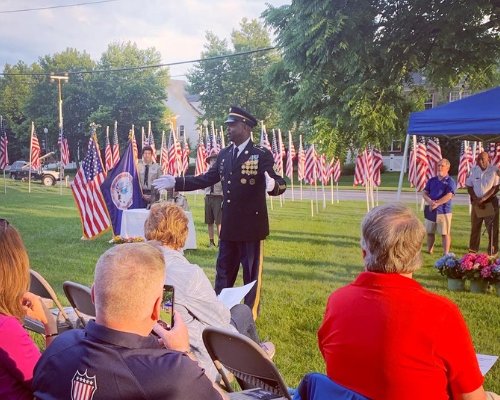 Sgt. Major Jame Gruder tells the story of Old Glory to the crowd at the Flags for Heroes ceremony.
Bristow Beat 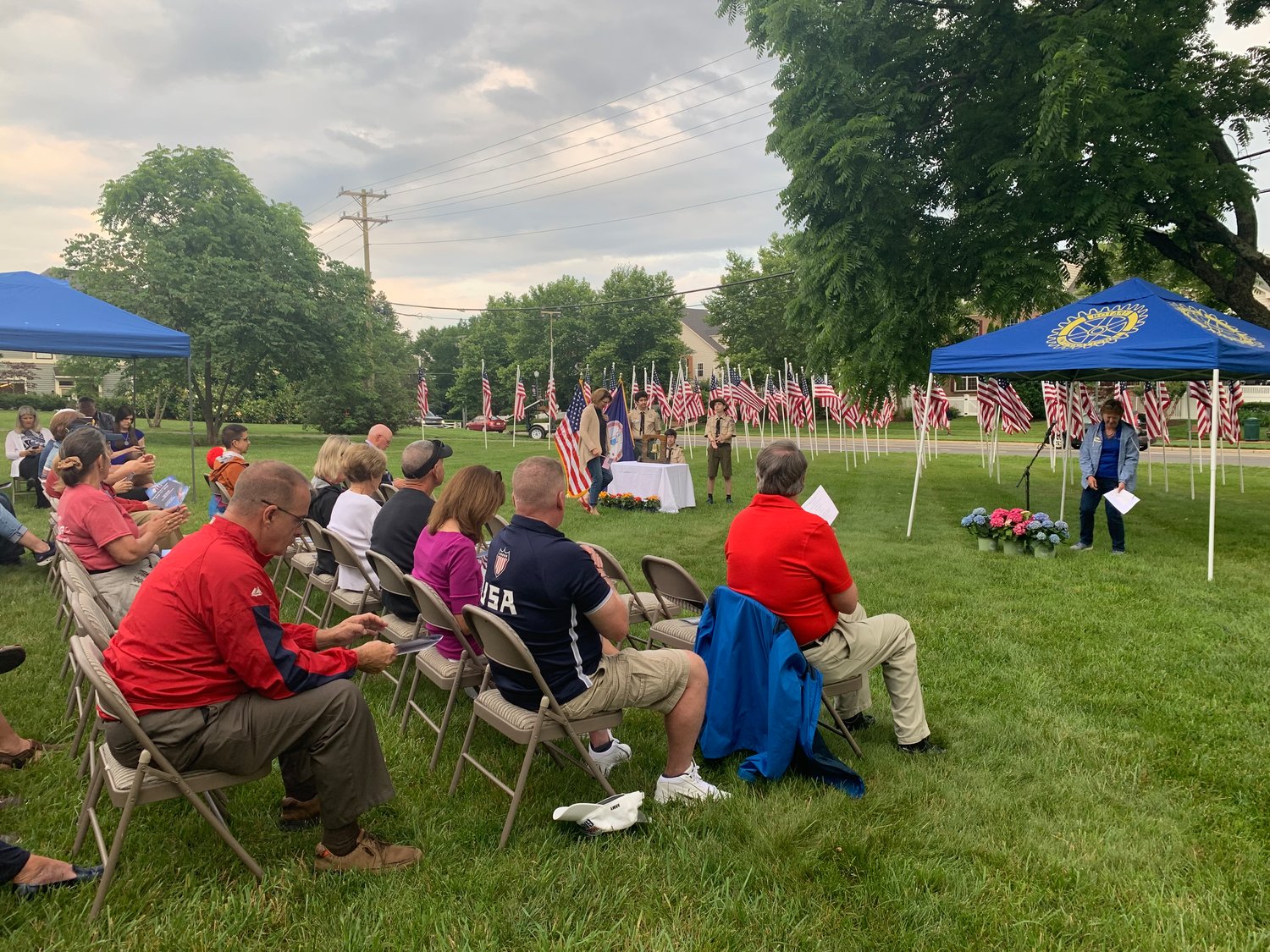 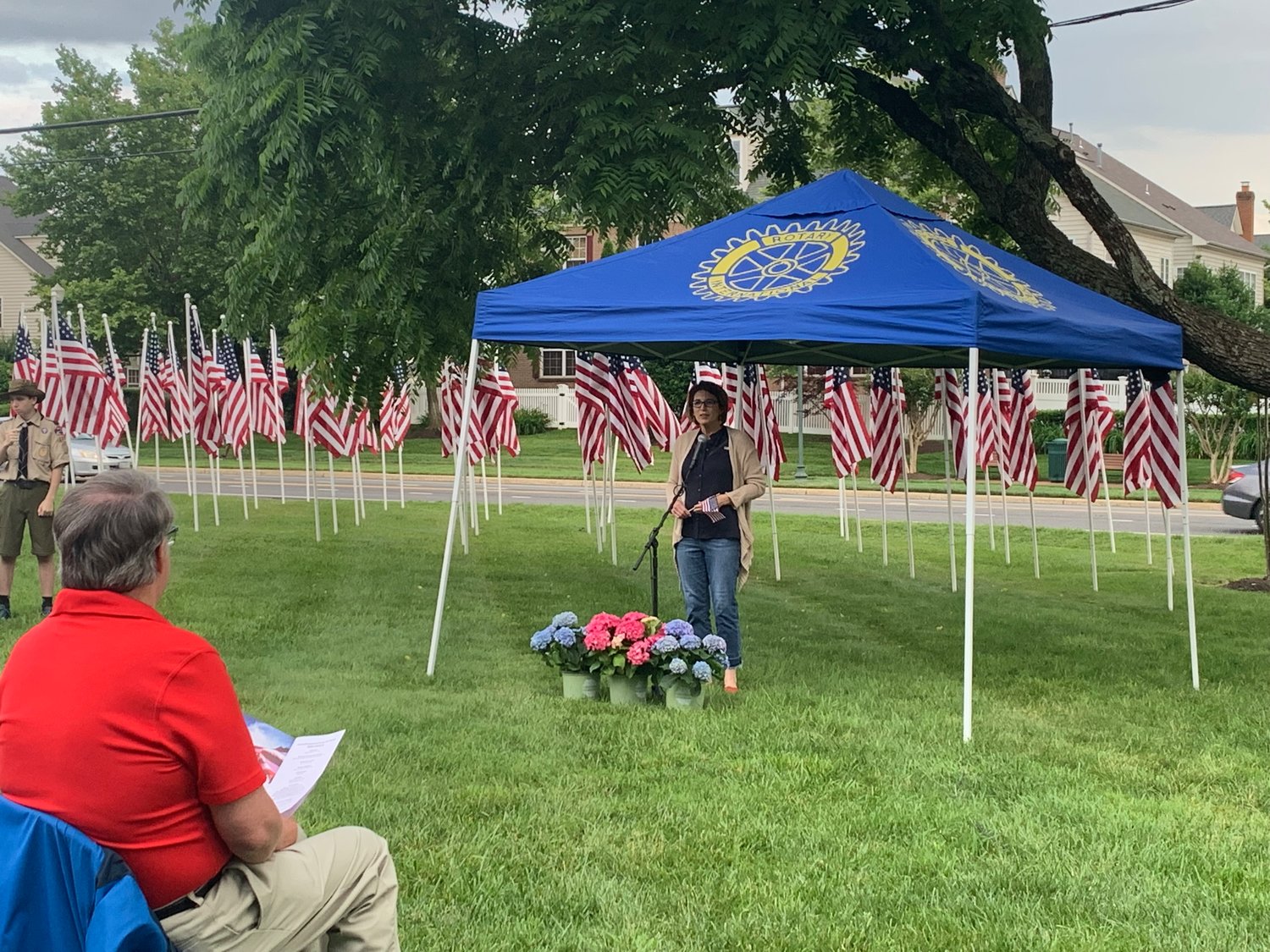 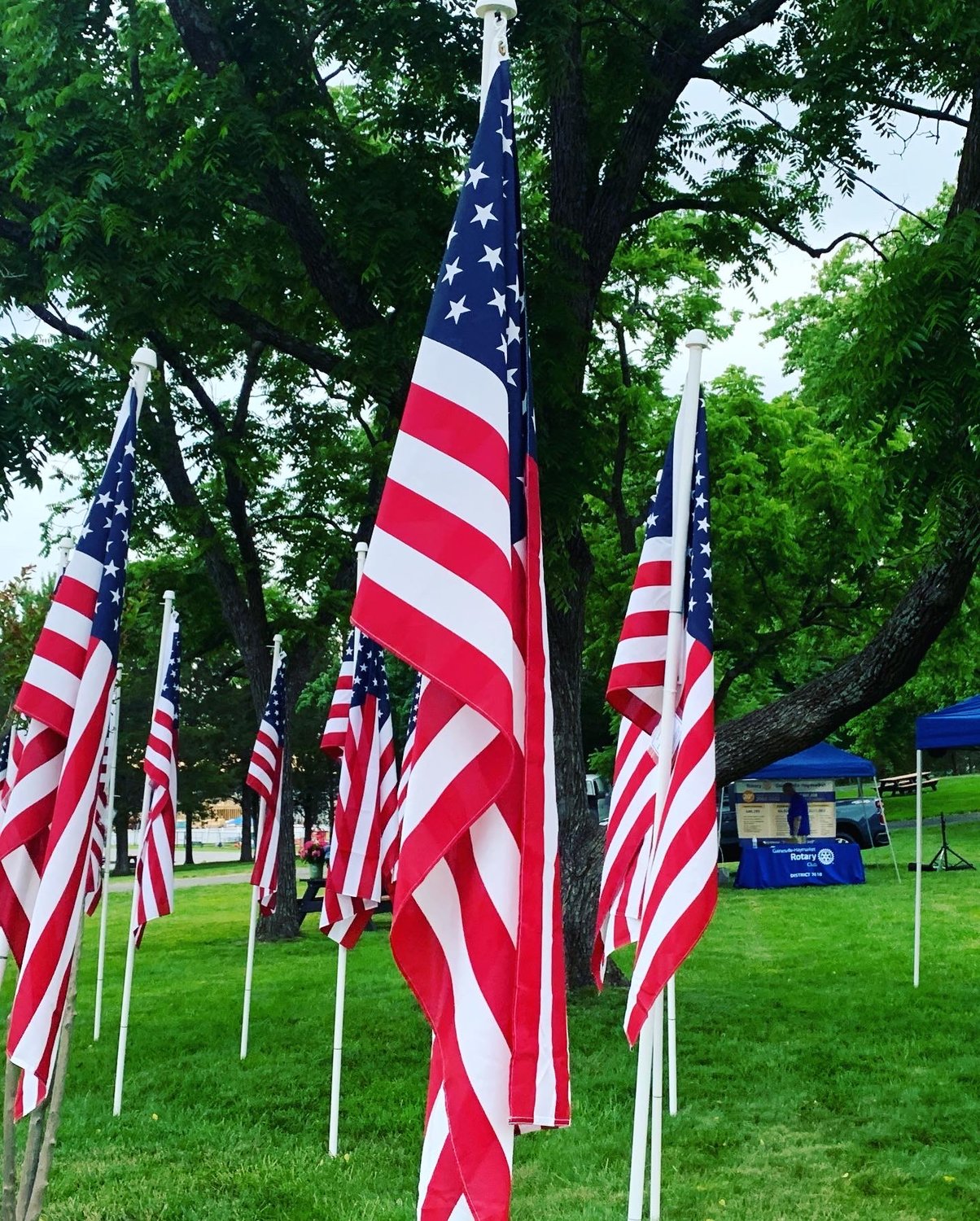 Flags are displayed on Washington Street on June 11, 2022.
Bristow Beat 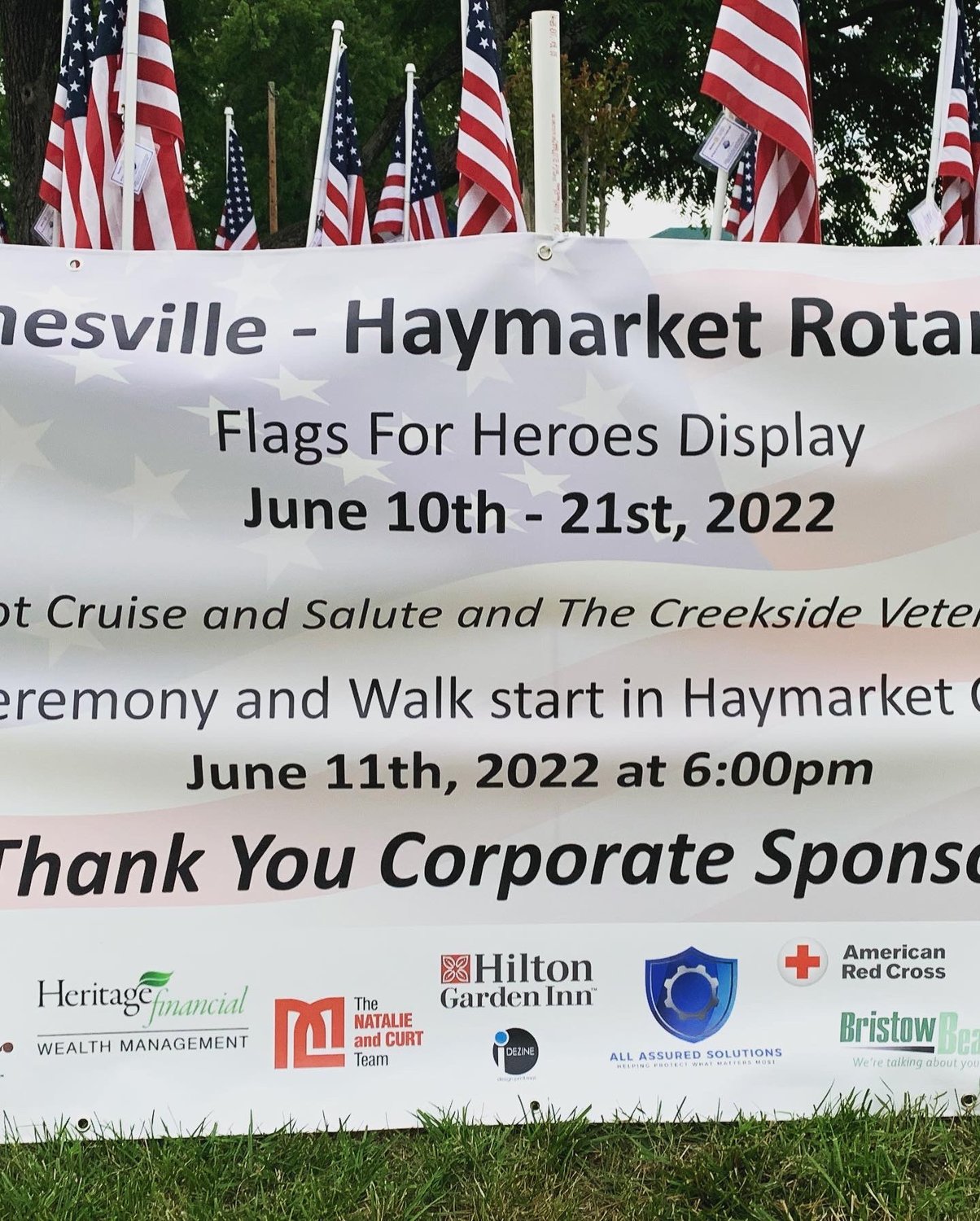 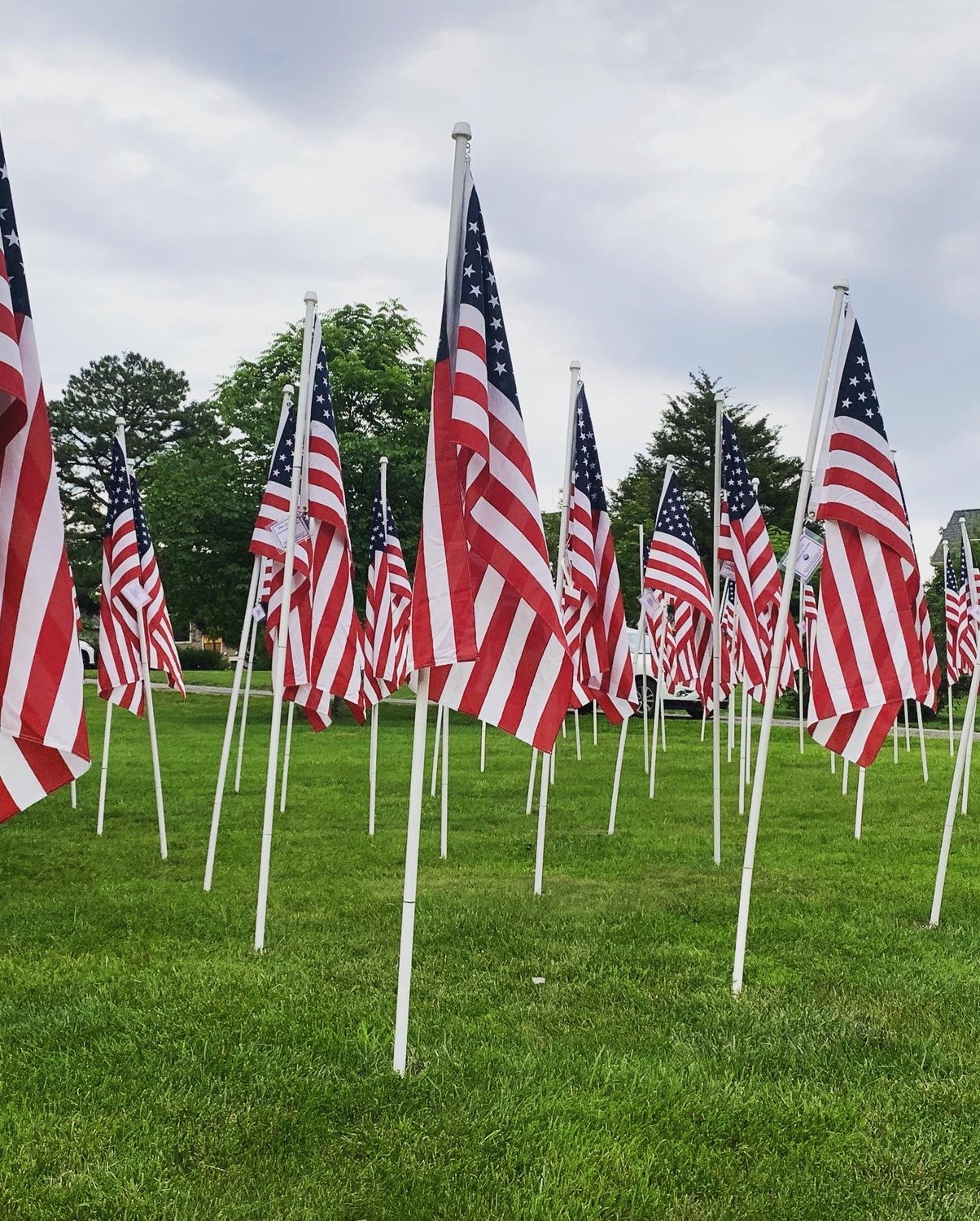 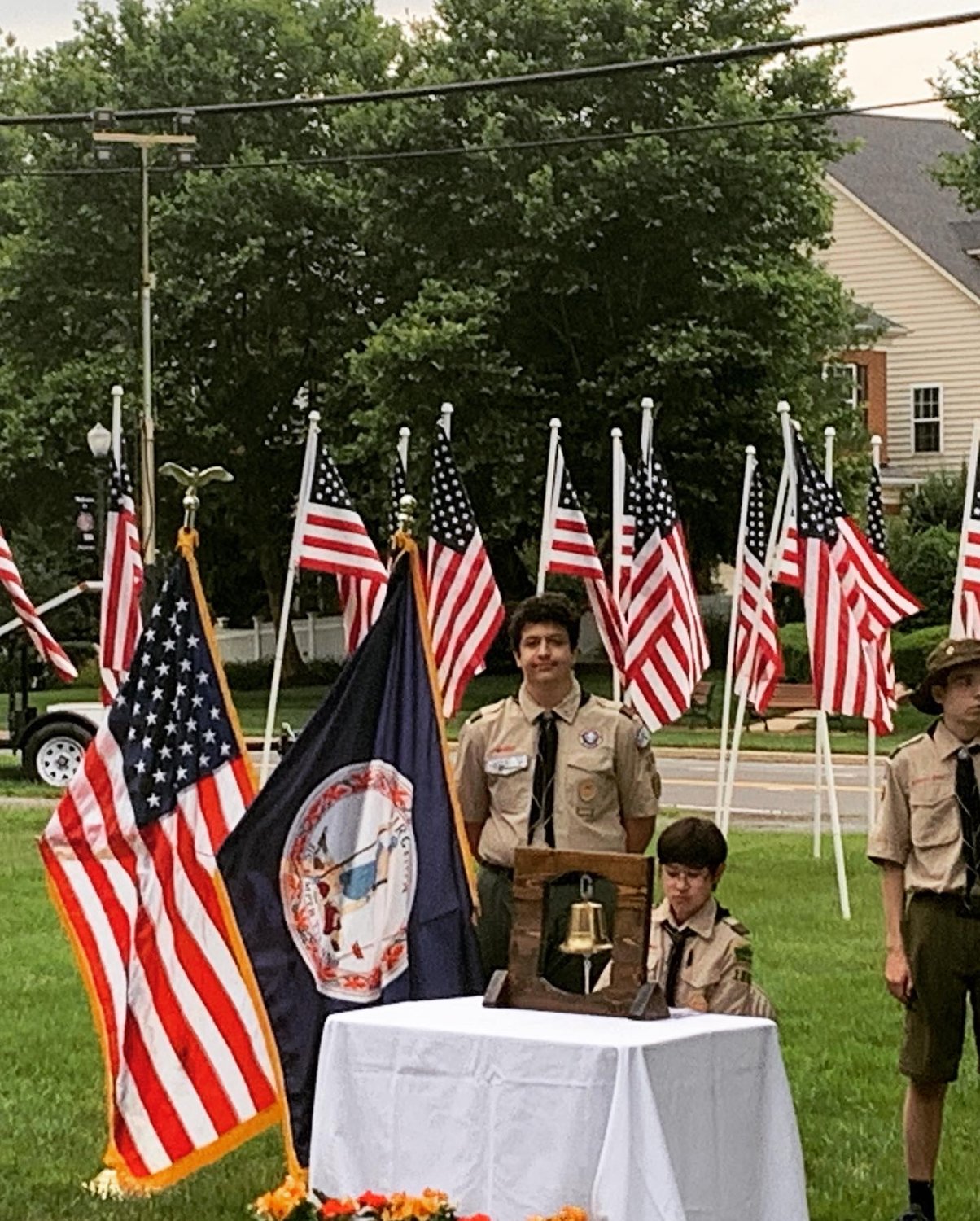 There's still time to dedicate a flag & register to walk

You may have seen 150 flags displayed along Washington Street in Haymarket this week. Each flag is dedicated to someone’s personal hero who served their country or community. Most flags were dedicated to military veterans, police, first responders, and nurses.

The Gainesville Haymarket Rotary Club organized the 5th annual Flags for Heroes charity event  Each donor dedicated a flag, helping the rotary raise thousands of dollars in support of the Creekside Veterans Club and The Patriot Cruise & Salute.

On June 11, The Gainesville Haymarket Rotary Club dedicated the flags at a ceremony at Haymarket Community Park in which dignitaries spoke. The ceremony was preceded by a walk along Washington street to build awareness for veteran suicide prevention.

Virginia Del. Danica Roem-D of the 13th District spoke of veterans like her father who died by suicide. Nineteen veterans take their lives every day in the U.S. That is why she supported the Virginia General Assembly’s bipartisan bill to create the position of Suicide Prevention Coordinator within the Virginia Department of Veterans Affairs.

She praised Serve Our Willing Warriors, which provides retreats to veterans suffering from injuries and PTSD.

“It often said: they are running towards danger while the rest of us are running away.” She said the rotary club is much a part of the “wonderful” Haymarket community.

Brentsville Supervisor Jeanine Lawson-R told the young people that the United States is a country chosen by God as a beacon to other nations. Americans have the freedom of speech, and they should remember the people who served as the true defenders of our republic.

The President of the Gainesville-Haymarket Rotary thanked local businesses for their generous sponsorships. He said the owner of Honey Baked Hams told him, “anything for our veterans.” Tony’s Pizza said to name the children and teachers who died in Robb Elementary School shooting.  “That’s a business that we all buy from, and the owner just gave me his credit card.”

He noted the list of flags honor veterans and other heroes: “nurses, policemen, firemen.” “Everybody who stepped in the line of fire.”

Dial Doug Burum, President of The Patriot Cruise and Salute, said they began the event 16 years ago and grew some just about every year. The veterans really enjoy the time together with family on the water. “Now it honors veterans, first responders, and police officers.”

The Creekside Veterans Club President Brian Schires said its mission is to “engage in fellowship,” and support other military veterans over the age of 65 who are in need. They look forward to working with local charitable and social organizations such as the Gainesville-Haymarket Rotary Club.

U.S. Army Sgt. Major James Gruder gave a riveting speech about the flag “Old Glory” and how it served bravely for more than 250 years, returning with battle scars, and was at times, disrespected by its civilians. Old Glory also has been honored and has had the honor of adorning fallen soldiers and representing a nation like no other.

‘Old Glory’ represents U.S. military veterans and deceased military members, the sacrifices they have made, and the trials they have endured for freedom, democracy, justice, and dignity. Old Glory has flown in more than a hundred wars, conflicts, military actions, and peace-keeping missions at home and abroad. It has flown in thousands of battles and skirmishes so that generations of Americans could enjoy peace and prosperity at home.

Readers are encouraged to make donations to the military charities listed in the article.