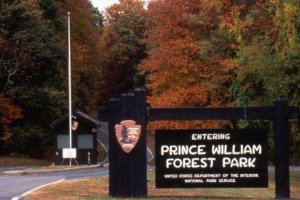 The Coalition to Protect Prince William County, a bipartisan organization, asks that residents speak out against allowing the county to build a data center near Prince William Forest Park, which is a National Park.*

The Prince William Supervisors will vote on item 15C, "Independent Hill Small Area Plan," at their March 16 meeting.  The public hearing begins at 5 p.m. The amendment to the county's long-term Comprehensive Plan would alter approximately 544 acres.

County staff defines the boundaries of the Independent Hill Small Area land as bisected by Route 234 (Dumfries Road), bounded by Colgan High School on the north side, Prince William County Landfill on the east, Independent Hill Drive on the northwest, Bristow Road to the southwest, and extending south along State Rte. 234 to Minnieville Road.

"Existing agricultural zoning within the Plan boundaries covers a large portion of the study area," reads the report. Undeveloped land counts for 248.7 acres or 45.7% of the 544 acres.

County staff describes the amendment plans as providing the kinds of open space and recreational uses that residents desire.

A goal of the Independent Hill Small Area Plan, a ±544-acre study area, is to create a community that capitalizes on the abundance of open space, recreation and education assets while building a vibrant pedestrian-friendly village and employment center, attracting desirable uses including neighborhood commercial, office, particularly for Prince William County agencies, along with light industrial and technology/flex development to provide an economic base that is compatible and supportive of a quality residential environment.

"The Data Center Opportunity Overlay District covers an extensive portion of the small area plan," reads the plan. "Consideration should be given to reviewing the boundary after adoption of the plan."

This proposal is part of a recent trend by some Prince William County Board of Supervisors officials to undermine the Rural Crescent, which was enacted to preserve rural open space, clean drinking water, and keep taxes low by reducing infrastructure costs. This policy has been successful and continues to be popular with voters. Yet, some on the Board of Supervisors are advancing policies to allow windfall profits for a handful of landowners. The result would be lower water quality, lost tourism dollars, and higher taxes. Help protect the largest piedmont forest in the National Park System, the highest quality stream in Northern Virginia, and the Rural Crescent.

Text of the Petition:

Data centers in the wrong places wreak havoc on residential communities and small businesses alike.  We have data center industrial use being proposed adjacent to our coveted Federal Parks – now at Prince William Forest National Park, and soon at the Manassas National Battlefield! Data center energy infrastructure needs are like no other industry in the world. Requiring as much power as a city for a million sq. ft. complex is typical.  And as an industry, their carbon footprint nearly matches the aviation industry. The environmental devastation emanating from their huge concrete buildings cannot be ignored. The impervious surfaces leave no opportunity for groundwater filtration, putting at risk how our watersheds function, and impacting our fresh clean water resources.  This would be true industrial blight next to homes and in National Parks! To ignore the lessons we learned from the Haymarket Amazon data center is pure folly. The community in the Gainesville district advocated for the creation of a data center overlay district for Prince William County.  This Board choosing to place data centers outside of those borders puts every home value at risk, due to the impacts of these massive transmission lines that function as personal extension cords for data centers. What we learned in the Haymarket fight was that these big tech companies expect citizens to pay the price tag for their hundreds of millions of dollars worth of electrical power and water infrastructure.  We, the residents and citizens of Virginia, are subsidizing their massive billion dollar profit margins – while sacrificing the integrity of our homes and unique environmental assets. Does that sound like fair trade to you? There is an opportunity to save that parcel with state, federal and private stakeholders, and add it to the Park.  THAT is forward thinking and would result in a real win for our community and the elected leaders who espouse climate action! Say NO to data centers in the legislative boundary of Prince William Forest National Park! There are a number of ways you can impact Tuesday’s vote – which will affect our homes, our watershed, our Rural Crescent, and our Prince William Forest National Park. Full details below. Contact elected officials and tell them we need to protect Prince William Forest Park. Click here for contact information for all Prince William elected officials. Sign the Petition here. Sign up to join the Caravan here.  "We're going the Board of Supervisor's Meeting on Tuesday, March 16 as a caravan. It is our goal to let the Board know that many, many citizens care about what is done to the Rural Crescent." "We will be meeting at Target in Bristow at the back of the parking lot at 4 pm. We will have supplies to decorate your car. We will be traveling in groups North 28 to 234 to Prince William Parkway (which will turn at light at Liberia) down to the McCourt building in Woodbridge for the Board meeting." The Coalition to Protect Prince William County is a bipartisan 501c nonprofit. Find out more about them here. Learn more about the Coalition to Protect Prince William County.

OPINION: Why the Prince William School Board School Should Oppose the Digital Gateway

Dear Governor: I Need to Report Some PWCS Teachers

CALL TO ACTION - Another Data Center Transmission Line for Gainesville?!

Celebrate 4th of July Safely: Leave Fireworks to the Professionals