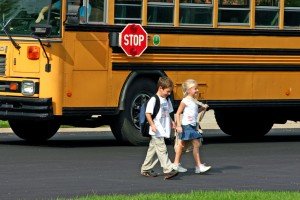 Kathy Smaltz worries about her own children and her students, while schools in Nokesville were under lock-down.

What mother hasn’t stood in the door frame of her infant’s room, looking for the rise and fall of that tiny chest? Who, among us, hasn’t breathed a sigh of relief after some “almost accident” (Here, I think of some doozy near misses our children have had, because they’re … well … children.)

Three mothers in Chardon, Ohio now mourn the senseless murder of their teenage children, due to yet another school shooting, this most recent one in America’s heartland.

Only one month ago, I sat with my own back against a cinder block wall two feet away from a student crouched under a counter – both of us hiding – as far away from the classroom door as we could get – both of us waiting, wondering why our school was on lock-down. In those minutes when I shut the lights off and secured the room (the door, always locked, now shut and barricaded by a plastic, woebegone folding table), I was taken back 8 years in time to the last day of school, in June 2004, at Bull Run Middle, when I was one of several people in the front office taken hostage by a gun-wielding 13 year old.

That day in 2004, I didn’t yet have kids of my own, and I – along with other teachers and staff – sprang into action to protect other people’s children. A month ago under lock-down, I also did my duty, but my thoughts wandered from my classroom to the whereabouts of my own children, not a half mile away in the nearby elementary school. If we were under lock-down, didn’t that mean they were too? Who was protecting them? I thought of their teachers, each of whom I trust without hesitation. Still, I wanted to storm over there and do the protecting myself. For I am a Momma Lion and no one can do a better job than I.

It seems funny to me now, but when I was in college, I hated the stress of my work as a bank teller ... you know, being responsible for all that money and wondering if today was the day someone would hold up the bank. For all intents and purposes, it was a good job, but the next summer when I needed work, I did not return.

I’d left the bank out of a fear of violence. Ironically, it turns out teaching can be a pretty dangerous occupation itself.

Two years after my job as a teller, I was hired as a high school summer school teacher in Williamsburg. In walking from the office to my classroom one day, I heard shouts. At the end of the hallway, a fight broke out, and instead of using just fists, a boy aimed a handgun at another boy. I ran in the opposite direction, and someone else responded ... no doubt an administrator who had three things on me: proximity, experience, and rank.  The situation was diffused before any shots were fired.

Ten years later, I knelt down – as I was told – on the tile floor at Bull Run Middle, flanked by two 8th grade boys whose lives I felt especially responsible for because they had accompanied me to the office to run banal errands. Together with a parent and her child, the school’s security officer, another teacher, the school nurse, and two secretaries, we waited for the boy with the gun to decide our fate.

I will never forget the tiny grey specks in the floor tiles, for at the time, I thought they would be the last thing I’d see alive.

I’ve been lucky twice, for on that second occasion when I met with armed teenagers, still no shots were fired. You can understand, however, why, when our high school was on lock-down last month, I was perhaps more anxious than others.

Imagine how slowly the minutes tick by, how five minutes feel like 15, how the day takes on a surreal haze, how, after the threat of violence, nothing after – is quite the same.

Imagine how – like all parents – I long to protect my children while simultaneously realizing that it just ain’t possible for me to do it all by my lonesome, Momma lion or no Momma lion.

What Do You NEED to Get Happy?

Flushing It Out: Breaking Up with Yourself